The Profit Margin of US Retailers in Transfer Pricing

Segue a reliable method to determine the arm's length profit margin of each selected comparable company to benchmark the tested party. For each selected comparable company, we measure Total Costs (Lato) = COGS + XSGA + (DP – AM). In Standard & Poor's Global (Compustat) mnemonics, COGS is cost of goods sold, XSGA is operating expenses, DP is the depreciation of property, plant & equipment (PPENT), including AM that is the amortization of acquired intangibles. Denote C as Total Costs (Lato) and S as Net Sales, which for each selected company is the sum of the unit price of the individual goods and services offered by the enterprise during the fiscal year multiplied by the respective quantity supplied:

Equation (1) represents an accounting identity that in each fiscal period net sales are equal to total costs (lato sensu) plus operating profits after depreciation (but excluding the amortization of acquired intangibles because they may not be integral to the business operations under transfer pricing audit) (EBIT).

To simplify exposition, we hide the comparable i-th subscript.

Add a behavioral equation that the net profits after depreciation (EBIT exclusive of amortization or OMBA) are proportional to the company’s net sales during the same period:

where the slope μ = OMBA is the net profit margin and U(t) is a random error.

Transfer pricing analysts estimate structural equation (2), which is misconceived. A correct procedure is to substitute (2) into (1) and obtain a reduced-form equation, whose parameters we can estimate using regression analysis:

The net profit margin is obtained by indirect least squares from equation (3) using the formula:

Profit Markup of Major US Retailers

The net operating profit markup of several major US retailers is estimated using all available data to fit equation (3). The OMBA ratio can be calculated by using equation (4), which we leave to the reader as an exercise. However, we report the profit margin per selected company on the charts below.

Equation (3) was run with the intercept but they are suppressed on the table below because they are weak or insignificant. The t-statistics are Newey-West estimators that correct for serial correlation among the residuals. See Zeileis (2004) and Green (2018), Section 20.5.2, pp. 998-999 (“The White [1980] and Newey-West [1987] estimators are standard in the econometrics literature.”).

The OLS regression results are reliable measured by two tests:

We provide a chart of OMBA (EBIT margin, excluding AM) considering all available annual data per company from 1978 to 2019.

For comparison, we provide a chart of OMBD (EBITDA margin), including the profit margin for the top 10 US retailers in our sample. This range of EBITDA margins (6.7% ± 0.5%), which reflects the business operations of the top 10 US retailers, include 658 annual observations. According to the statistical law of large numbers, this large sample produces very reliable results. E.g., the Newey-West t-statistics is 344.3, the OLS (ordinary least squares) t-statistics is 1,220.3, and the R2 is 0.9996.

Second, the R2 of every company assayed is close to one, which is its maximum value. The R2 measures the explanatory power of the regression equation, indicating that in our application of equation (3) the residual left to chance is negligible.

We believe that RoyaltyStat offers for subscription the most effective transfer pricing interactive software as a service (SaaS) in the industry. 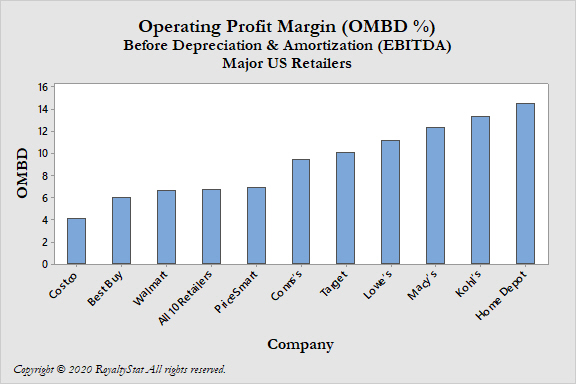