Should Brazil Adopt the OECD Guidance on Intercompany Financing?

Brazil’s approach to intercompany financing may respect the currency of denomination of a multinational’s intercompany loan policies but falls short of other key aspects, such as the term of the intercompany loan. The OECD released its transfer pricing guidance on financial transactions on February 11, 2020. The guidance on the pricing of intercompany loans placed appropriate focus on the contractual terms as well as the credit rating of the borrowing affiliate.

Chapter 10 of Transfer Pricing in Brazil Towards Convergence with the OECD Standard (2019) is entitled “Transfer pricing aspects of financial transactions / intra-group financing”. This chapter discusses the OECD guidance on the extent that financing can be classified as debt versus equity as well as the issue of hybrid mismatches. In terms of the pricing of an intercompany loan, this document describes the Brazilian approach and how it differs from the OECD approach. In particular, it notes that the Brazilian approach “does not take into consideration all the relevant economically significant characteristics of transactions, e.g., the term of the loan, or the size and creditworthiness of the lender”. The chapter also notes that the OECD and Brazilian approaches need to converge in order to avoid double taxation.

The Brazilian approach requires that verification of the appropriate interest rate for transfer pricing purposes must be done on the date of the closing of the loan agreement, and renewals and renegotiations are considered as new agreements for this purpose.

As an example, let's assume that a Germany-based multinational extended a 10-year fixed interest rate intercompany loan of €1 billion to its U.S. affiliate on January 2, 2014. Interest rates for very short-term financial instruments in both Germany and the U.S. were low on this date. The following figure shows the six-month LIBOR rates by month over the period from January 2014 to December 2021 for both dollar-denominated and euro-denominated instruments. Both rates were 0.35% on January 2, 2014. Brazilian rules would therefore allow a maximum interest rate of 3.85% whether the intercompany loan was denominated in dollars or euros.

We shall argue that the lack of reporting for LIBOR rates starting in 2022 is not the only problem with current Brazilian rules. On January 2, 2014, the term structure for German government bonds was upward sloping. The term structure for U.S. government bonds was even more upward sloping. The following table presents the interest rates on January 2, 2014, for 2-year, 5-year, 10-year, and 30-year German government bonds, as well as for U.S. government bonds. The interest rates of short-term Treasury bills were only 0.1% on this date, so the six-month LIBOR rates already embedded a 0.25% credit spread for interbank debt. Adding the 3.5% loan margin would result in a 3.75% credit spread if the intercompany loan were a floating rate instrument.

Six-month LIBOR rates for dollar and euro-denominated instruments: 2014 to 2021 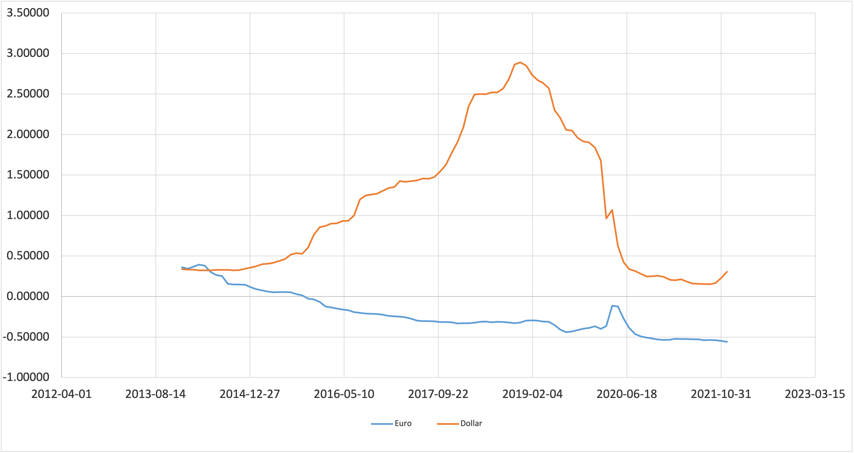 Interest rates for January 2, 2014 on various financial instruments in Germany and the U.S.

Our example, however, assumes a fixed interest rate loan with a 10-year term. The German 10-year government bond rate was 1.95% so a 3.85% interest rate would be consistent with a 1.9% credit spread. If the credit rating for the Brazilian affiliate were BBB-, then this 3.85% interest rate would be consistent with the arm’s length standard. If the appropriate credit spread, however, was BB, then the German tax authorities could readily assert that the arm’s length interest rate should be closer to 5%. If the interest rate deduction under Brazilian law were restricted to €38.5 million per year while the German tax authorities expected the German affiliate to receive €50 million per year in intercompany interest income, the multinational faces double taxation.

This double tax issue is less pronounced if the term of the fixed-rate intercompany loan were between 2 years and 5 years. If the term of a euro-denominated loan were 30 years, double taxation would be more pronounced unless the credit rate of the Brazilian affiliate was a strong investment-grade credit rating. Note also that intercompany loans denominated in dollars would face even more severe prospects of double taxation given the fact that the term structure for U.S. financial instruments was steeper than the term structure for German government bonds.

Tax authorities that follow the pricing approach noted in the OECD transfer pricing guidance on financial transactions are able to properly evaluate the arm’s length interest rate if the terms of the intercompany loan contract are properly articulated and the appropriate credit rating can be agreed to. The OECD guidance is similar to the Brazilian rules in its focus on the date of the loan as well as its currency of denomination. The OECD guidance also recognizes the distinction between longer term fixed interest rate loans versus floating rate loans. While the OECD guidance never mentions the use of LIBOR, it does allow for the general use of interbank rates as the base rate for floating rate loans. As such, domestic interbank rates could be used for floating rate loans even after the demise of LIBOR. Brazil’s tax authority is therefore encouraged to adopt this sensible approach.

Igor Scarano is a transfer pricing specialist with extensive experience spanning more than 17 years, including 1.5 years in Europe (Zürich and Düsseldorf), working with a Big 4 firm. He has advised multinational corporations on aligning the Brazilian requirements with the OECD standard. Igor has a bachelor’s degree in Law and an LLM in Law & Economics.