Corporate reorganizations among related parties are vulnerable to challenges by tax authorities for lacking “economic substance”.  E.g., the U.S. Treasury Regulations § 1.482-1(d)(3)(ii)(B) provides that written contractual terms and the reallocation of risks will be respected if they are “consistent with the economic substance of the underlying transactions.”

Likewise, the OECD Transfer Pricing Guidelines provides on ¶ 1.65: “There are two particular circumstances in which it may, exceptionally, be both appropriate and legitimate for a tax administration to consider disregarding the structure adopted by a taxpayer in entering into a controlled transaction. The first circumstance arises where the economic substance of a transaction differs from its form. In such a case the tax administration may disregard the parties’ characterization of the transaction and re-characterize it in accordance with its substance. … The second circumstance arises where, while the form and substance of the transaction are the same, the arrangements made in relation to the transaction, viewed in their totality, differ from those which would have been adopted by independent enterprises behaving in a commercially rational manner and the actual structure practically impedes the tax administration from determining an appropriate transfer price.”

Economic substance can be tested as follows: Let M0 represent the taxpayer’s (tested party) operating profit margin (“OPM”) before a corporate reorganization in which certain functions and assets of an originally integral business are stripped and relocated to a foreign (e.g., out of State) jurisdiction. Operating profit margin is the ratio of operating profit to net sales. E.g., procurement, management functions, and intangible property are relocated to another tax jurisdiction (country or State) in exchange for corresponding new outbound related party payments.   Segue that M1 represent the OPM of the same taxpayer after the corporate reorganization.  The taxpayer can establish economic substance of the corporate reorganization if and only if:

because it makes no economic sense to relocate certain functions, assets, and risks offshore when such a decision would decrease, instead of an expected increase in the current OPM.  Only after this economic substance test is met, i.e., when the taxpayer can show that M1 exceeds M0, do we go to the next step of testing if M1 is arm’s length benchmarked against selected comparables.

In special circumstances, such as during a short learning-by-doing period, the relevant tax authority may consider a temporary case in which M1 ≥ M0 (without requiring a strict inequality condition); however, the perverse result in which the profit margin decreases after the corporate reorganization, i.e., M1 < M0, has no economic substance.  Prima facie, cases lacking economic substance are likely to be disallowed by the tax authority, and no passage to the next level would be allowed in which M1 is tested for arm’s length behavior. E.g., we noticed that the OPM of certain taxpayers decreased from 5% to 1% after a crossborder relocation of functions or assets, which is an invitation to a transfer pricing audit.  No experienced tax authority would let such perverse displacement of the OPM from one fiscal year to the next after a corporate reorganization go unchallenged.

This portmanteau test (M1 > M0) reflects a well-known economic principle that a rational (equivalent to a profit maximizing) agent has no motive to change the status quo (the current OPM) unless a higher payoff (better-off position) is expected from the change, such as by an anticipated increase in OPM from t = 0 to t = 1. Changing the status quo in anticipation of being worse-off is perverse, it's anomalous, which is not the normal behavior of a rational agent. A basic economic axiom is reflected in a duality principle that agents are rational in the sense that they maximize benefits or they minimize costs; the dual results are the same. Among others, see James Henderson & Richard Quandt, Microeconomic Theory (3rd edition), McGraw-Hill, 1980 [1958], p. 286.

In sum, corporate reorganizations in which controlled entities violate this expected higher payoff economic principle (M1 > M0) are unlikely to survive transfer pricing audit scrutiny, particularly after BEPS (contra tax base erosion and profit shifting) actions. Corporate Reorganizations with and without economic substance are illustrated on the following graph: 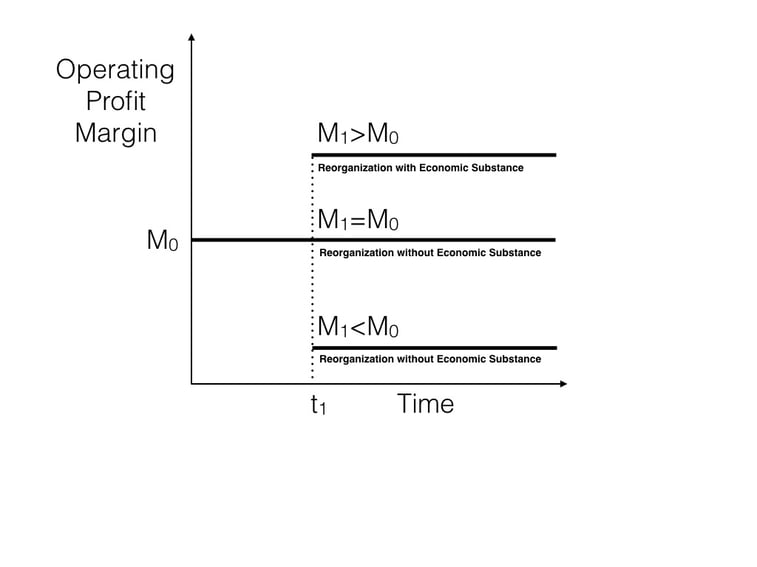