In economic theory, high profits converge toward an entrepreneurial average because of the expected inter-industry flow of investments. According to Stigler’s (1963, p. 54) hyperbole: “There is no more important proposition in economic theory than that, under competition, the rate of return on investment tends toward equality in all industries.”

Reality is not abiding to economic romantics (like Stigler).

Despite longstanding anti-trust institutions, economic concentration and the existence of oligopolies are facts of life.

In this blog, I selected a group of 29 major US corporations engaged in researching, producing and distributing chemicals and allied products (including pharmaceuticals) and show that their operating profit markup is high and stable over 70 years. I created the relevant dataset using the canonical criteria:

b) Country of Incorporation: United States;

I estimated the profit markup per company by using an econometric model that can be traced to Cournot in 1838. See Stigler (1957), footnote 19.

Another disadvantage of the first-order autoregressive model, adopted by Mueller (1986, 1990) and his research colleagues, is that this model lacks economic content because it can be converted into a series of moving average random errors.

Total cost (XOPR = COGS + XSGA) is the sum of the cost of goods sold (COGS) and selling, general and administrative expenses (XSGA).

To simplify exposition, I have not adjusted COGS to remove the effect of the change in inventory profit or loss to make the accounting concept of COGS more consistent with the microeconomic concept of variable cost.

The Compustat annual company data are distributed under paid subscription in the RoyaltyStat website, to which I have added important online transfer pricing analytical tools, including the regression function that produced the calculations written on the table below.

I combined the specified Compustat mnemonics to obtain:

Tax authorities should monitor the persistence of high oligopoly profits to establish a group ceiling as a test of reasonableness of inter-group transfer pricing adjustments. The US group ceiling is equivalent to taxing the combined (country consolidated accounts in which intra-group transactions are eliminated) US operating profits before a reasonable allowance for depreciation. 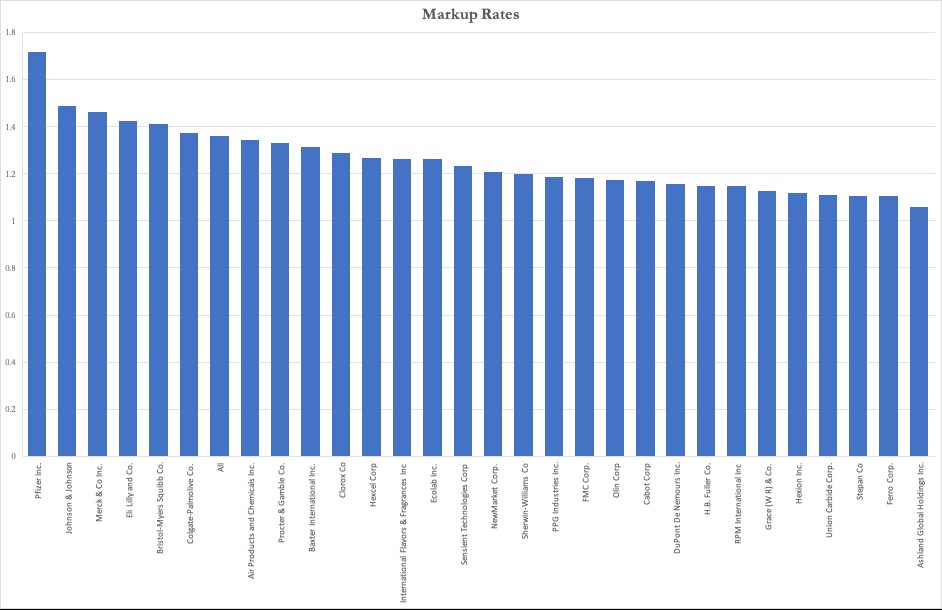