Return on Assets is Détaché from Economics

"The true theorist in economics has to become at the same time a statistician."

Many transfer pricing reports (against Ragnar Frisch’s advice) are devoid of economics or statistics principles. Here, I show that the usual transfer pricing application of "return on assets" (ROA) is disreputable.

The usual ROA application consists of reporting quartiles of the computed ratios (ρ):

The variables P and K are taken after depreciation. Using Standard & Poor’s Compustat mnemonics, I define the variables P = (OIADP + AM) and K = PPENT (property, plant & equipment, net of accumulated depreciation) because these definitions are consistent with accounting and economics principles. In RoyaltyStat, (OIADP + AM) is called OIBAM, i.e., operating profit before the amortization of intangibles.

I disregard the intercept and statistical error in eq. (1) to facilitate exposition.

Two questions are relevant. First, how is the variable K measured? Second, should K be delayed one-period? That is, should K be measured at the beginning or at the period end?

In economics, K must be measured in cogent terms connecting the balance sheet (where K is reported for tax or book purpose) with the income statement and the cash flow statement of the given enterprise. The consistent terms are provided by the "law of motion" (growth rate) of the aggregate (indecomposable) accounts combining property, plant, and equipment (K):

Like P, the depreciation of property, plant, and equipment (i.e., δ K(−1), which is a component of eq. (2)) is reported on the income statement of the selected enterprise, and G (gross investment or CAPX) is reported on the cash flow statement. The parameter δ is the depreciation rate, and γ is the computed growth rate of K. Operating assets in eq. (3) are obtained by dividing eq. (2) by K(−1), and then solving for K.

Substitute eq. (3) into eq. (1) to obtain the reduced-form ROA equation, which can be then subject to empirical testing to determine its statistical significance and explanatory power:

The reduced-form slope coefficient [φ = ROA] in eq. (5) is weighted by the growth rate of K. The one-period lagged variable K(−1) is the appropriate base of ROA, and not K reported at the end of the period.

Empirical analysis involves an accept or reject decision between two or more competing models, such as eq. (1) versus eq. (5). See Lakatos (1970, p. 118). In economics, model (1) should not be used because it disregards eq. (2). Model (5) is well-specified and can be used for statistical decision-making.

Exhibit 1 shows the least-squares results of profit model (1). Exhibit 2 shows the results of profit model (5). Exhibit 3 compares the slope coefficients ρ versus φ, and they differ because γ is not zero. The statistical significance of the slope coefficients (verify the t-Statistics) of model (1) or (5) is weak, and the explanatory power of each model, measured by the regressions R2, is poor.

This statistical illustration suggests that "return on assets" is not reliable, and other profit indicators such as “return on sales” (ROS can be estimated by indirect least squares) may be more reliable. See my other blog: "Profit Margin by Indirect Least Squares."

The usual ROA analysis in transfer pricing assumes that γ = 0. As illustrated on the chart below, this special assumption (γ = 0) is unsupported by accounting data from "big oil" conglomerates. The hidden assumption γ = 0, implying that K = K(−1), which is made obvious in eq. (2), is a special case, and must be tested using comparable enterprise data.

This furtive assumption γ = 0 was accepted by the court in Coca-Cola, 155 T.C. No. 10 Docket No. 31183-15, United States Tax Court. See the court's uncritical replication of the ROA histogram ("Profitability of Supply Points vs. Global Industry Comparison Group") in Coca-Cola (p. 112), using eq. (1).

The other IRS misconception applying ROA in Coca-Cola is that its K is an amorphous aggregate, comprising accounts receivable, inventories, and "other" current assets in addition to property, plant and equipment. In origin, the IRS definition of K in Sec. 482-5(d)(6) is incongruous, because it mixes depreciable and non-depreciable assets, and assumes they have the same growth rate and rate of return. 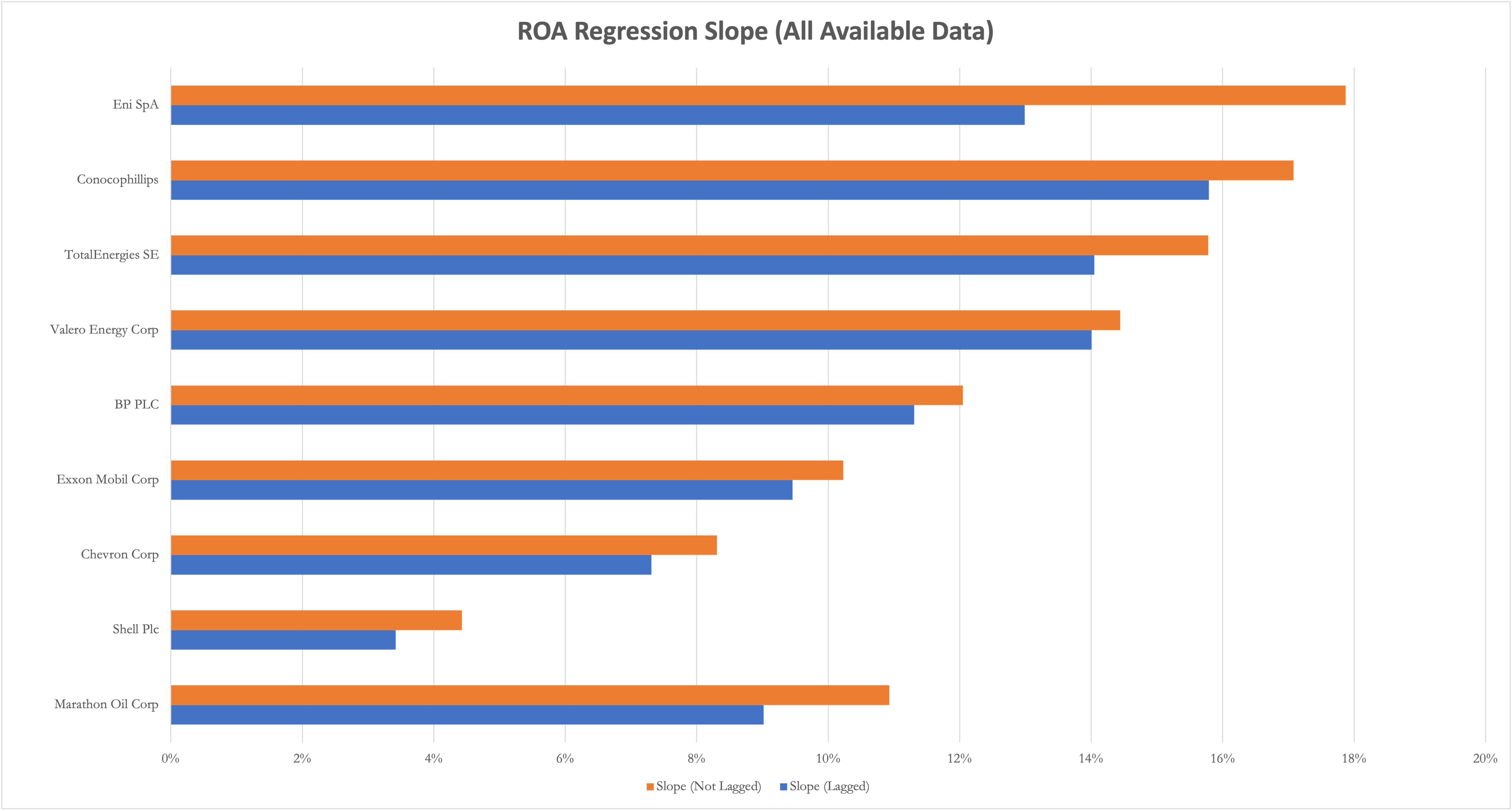