According to the OECD Transfer Pricing Guidelines (2010), ¶ 1.36, the “comparability factors” that “may be important” when determining comparability include:

These comparability factors are discussed in more detail at the OECD’s Section D.1.2.

Risks assumed are further elaborated on ¶ 1.45, which provides: “Functional analysis is incomplete unless the material risks assumed by each party have been considered since the assumption or allocation of risks would influence the conditions of transactions between the associated enterprises. Usually, in the open market, the assumption of increased risk would also be compensated by an increase in the expected return, although the actual return may or may not increase depending on the degree to which the risks are actually realized.”

Next, on the OECD ¶ 1.46, we read: “The types of risks to consider include market risks, such as input cost and output price fluctuations; risks of loss associated with the investment in and use of property, plant, and equipment; risks of the success or failure of investment in research and development; financial risks such as those caused by currency exchange rate and interest rate variability; credit risks; and so forth.”

In practice, we may not be able to measure individual risks (except perhaps for currency, interest, and credit risks), and might be compelled by data sparsity to consider risk as an aggregate measure. One plausible method is to employ level (center) vs. spread relationships, such as Sharpe’s analysis of 34 U.S. mutual fund’s profitability vs. risk performance from 1954 to 1963. See William Sharpe, “Mutual Fund Performance,” Journal of Business, Vol. 39, No. 1, January 1966. Stable URL: http://www.jstor.org/stable/2351741

where the t-statistics of the intercept is 5.72, of the slope coefficient is 8.62, the standard error of the residuals is 1.358, and the proportion of average returns (among the comparables) explained by investment risk (STDEV denotes standard deviation) is R2 = 0.6988. We made these estimates using Minitab statistical software: http://www.minitab.com/en-us/

where a predicted Average can be obtained by substituting an actual value of the tested party's STDEV, e.g., 15%, such that the risk-adjusted asset return can be calculated for a given STDEV. Likewise, a range of results can be calculated by using the standard error of the residuals.

This regression equation (1) means that if the STDEV (measure of business investment risk) is changed by one unit, the average “asset return” would be changed by 0.47 (roughly ½) units. Charts 1 and 2 below show unequal variance among the residuals (heteroskedascity), probably arising because Sharpe’s sample included mutual funds with different net asset value (NAV). Sharpe does not provide information about the individual NAV, so it's difficult to correct the suspected heteroskedascity by using weighted regression analysis.

In transfer pricing, one plausible way of taking into account assets employed and risks assumed (which is mandated by the OECD Guidelines and by the U.S. transfer pricing regulations) is to use regression analysis in order to estimate the functional relationship between a reliable measure of average “asset returns” derived from the “external comparables” against their respective measure of spread. In this regard, the usual linearity imposed à priori may not provide a good fit to the coordinated pairs (spread, level) of the comparable company data. A reason is that the assumption that increased risk would also be compensated by increased expected return (see OECD, ¶ 1.45) may imply a quadratic, and not a linear relationship because of risk-aversion. 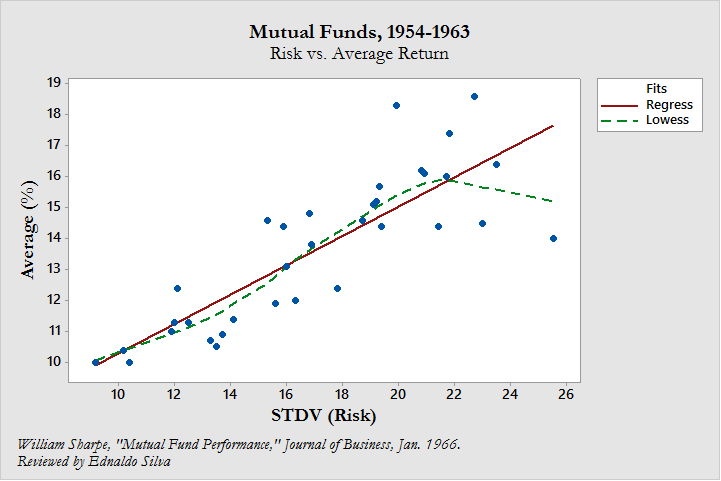