A very large sample of royalty rates (based on net sales) derived from unredacted license agreements, excluding related party licensor and licensee, shows a stable median of 5% or 6%. The sample count of 12,987 unique license agreements was retrieved from RoyaltyStat on February 29, 2016. This long-term stability supports my prior post conjecturing that royalty rates are "great ratios," i.e., stable ratios that can be treated as a "stylized fact" à la Kaldor. See Nicholas Kaldor in the proceedings of the "theory of capital" conference held in the Island of Corfu from Sept. 4-11, 1958, published in Frederich Lutz & D. Hague (eds.), The Theory of Capital (Macmillan, 1963), chapter 10. See also Lawrence Klein & Richard Kosobud, "Some Econometrics of Growth: Great Ratios of Economics," Quarterly Journal of Economics, Vol. 75, No. 2 (May, 1961). Stable URL: http://www.jstor.org/stable/1884198

It's difficult to ignore this long-term stability of royalty rates around a 5% or more recent 6% central value. The outlier values prior to 1984 and in 2015 reflect the smaller number of observations in those years. We will capture more unredacted license agreements having the effective date in 2015 as we progress in 2016. Thus, the higher median royalty rate observed in 2015 is expected to gravitate towards the long-term median of 5% to 6% as the 2015 sample size increases towards the historical annual count exceeding 1,200 new unredacted license agreements added to the RoyaltyStat database. 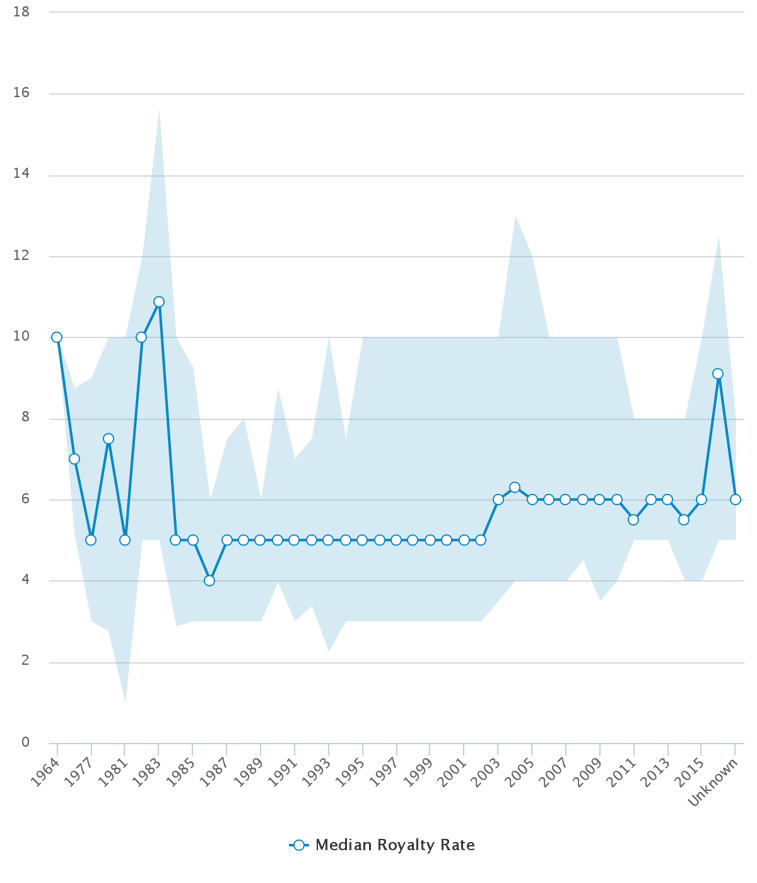