Naive analysts use the normal (Gauss-Laplace) distribution to compute the mean and standard deviation, or quartiles, without verifying if the data are abiding. Double fault is committed when they propose a “broad and unconvincing” range of data, such as the interquartile range (IQR), which may become useless to determine arm’s length (or reasonable) royalty rates. In practice, the interquartile range of royalty rates is used to help settle licensing disputes in tax or intellectual property valuation.

To better understand royalty rates in a specific industry, such as in chemicals, pharmaceuticals, software or medical devices, we consider a large sample of independent license agreements, subject to the following search restrictions (data were retrieved from RoyaltyStat on September 20, 2016):

b) Agreement Type (Including): Patent;

These large industry-wide samples may be used as a “sanity check” to test the reasonableness of the proposed range of royalty rates based on usually a small count of “comparables”. Using standard practice, the summary statistics of the 1,155 unique (non-duplicate) medical device agreements include the mean = 6.6%, standard deviation = 6.5%, and the quartiles are Q1 = 3%, the median (Q2) = 6.6%, and Q3 = 8%. The coefficient of variation is practically one, suggesting that the data have long tails. It is prudent to further explore the royalty rates distribution and examine the probable long tails to see if the selected data depart from normality.

First, using John Tukey's filter, we find that high outliers, measured by Q3 + 1.5 IQR, where the interquartile range is IQR = (Q3 – Q1), consist of medical device agreements containing royalty rates ≥ 15.5%. See J. Tukey, Exploratory Data Analysis, Addison-Wesley, 1977, p. 44. Observations beyond this outer fence are outliers, and they can be used as “comparables” only under special circumstances. Outliers distort the computation of the mean and standard deviation, and make them unreliable. Prima facie, the Medtronic proposed range of royalty rates (based on seven judgments or non-random “comparables”) between 0.5% and 20% include outliers when we consider this repository of available medical device license agreements. The existence of outliers suggests that in the Medtronic tax controversy a “test of reasonableness” (aka “sanity check”) was disregarded by the company expert. As a result, it's not surprising that the U.S. Tax Court (TC) rejected the expert report because it contained a “broad and unconvincing” range of royalty rates. See Medtronic v Commissioner of Internal Revenue, TC Memo 2016-112, Docket 6944-11, filed June 9, 2016, located online at: https://www.ustaxcourt.gov/UstcInOp/OpinionViewer.aspx?ID=10819

In conclusion, it's important to know the comparable data used to determine an arm's length range of royalty rates, and to test the reasonableness of the results using a larger or parent data set. Assuming that the selected comparables produce royalty rates (or profit margins) that obey the normal distribution may be perilous, particularly when we know that economic variables with positive values such as royalty rates tend to follow the lognormal distribution. In this regard, it's important to understand that standard statistical formulae to compute the mean, standard deviation, and quartiles belong to the normal distribution, and such formulae become different when the underlying data distribution depart from the ubiquitous normal assumption. RoyaltyStat has a built-in statistical tool to generate histograms and probability plots (based on royalty rates from your selected comparables), including ML estimates of the mean, standard deviation, and quartiles of the normal and lognormal distributions. 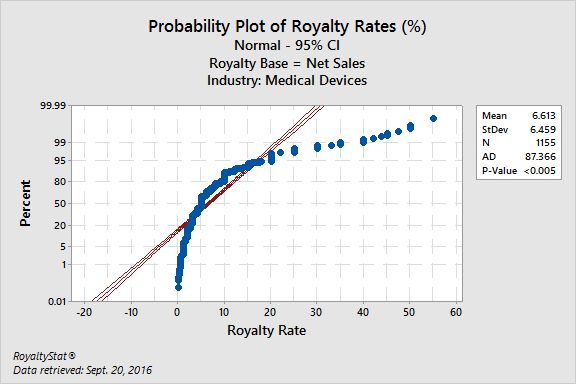