These results suggest also that comparability analysis is important to determine the event trigging the license fees, and the expected life-time revenue from the commercial use of the patents. As posited on a prior blog, the period-based royalty income can be determined by using the equation:

where φ is a comparable royalty rate obtained from RoyaltyStat, St denotes net sales attributed to the patent, At denotes the additional payments (license fees), and t = 1, 2, …, T is time (year).

For a given risk-adjusted discount rate, the forecasted royalties Yt from t = 1 to T can be discounted to a present value representing the worth of the patent portfolio. As described before, such a present value tends to be erratic, and we have suggested using PIM (perpetual inventory method) as a more reliable alternative.

The chart below shows that the number of utility patents per agreement is a reciprocal function. 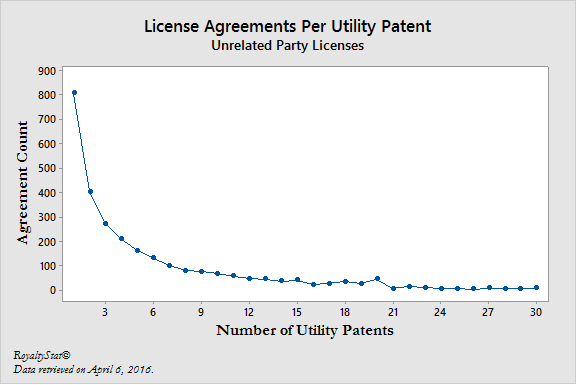