Transfer Prices Based on EBITDA, not EBIT

Applying the comparable profits method (CPM) in the U.S. or the “transactional” net margin method (TNMM) in other OECD countries, many transfer pricing analysts assume that the depreciation rate of property, plant, and equipment is the same among the individual comparables and the tested party.

The U.S. regulations provide for a “reasonable allowance for depreciation and amortization,” and the OECD provides for “net” (meaning net of depreciation) profits.

The U.S. Treas. Reg. § 1.482-5(d)(3) states: “Operating expenses includes all expenses not included in cost of goods sold except for interest expense, foreign income taxes (as defined in §1.901-2(a)), domestic income taxes, and any other expenses not related to the operation of the relevant business activity. Operating expenses ordinarily include expenses associated with advertising, promotion, sales, marketing, warehousing and distribution, administration, and a reasonable allowance for depreciation and amortization.” Emphases added.

In RoyaltyStat®, we assist several corporations and tax administrations by providing de novo reviews (aka hazards of litigation risk analysis) of transfer pricing audits and contemporaneous documentation prepared by others. We observe many instances of transfer pricing reports submitted to tax authorities adopting (without disclosure) this depreciation rates equalization hypothesis.

Unless this equivalence hypothesis is supported by data from the comparables, it’s more appropriate to measure the profit level indicator (PLI) as EBITDA and then allow for a “reasonable depreciation” of the tested party’s property, plant, and equipment.

From the perpetual inventory method of estimating capital stock, we run a linear (straight-line) regression model of depreciation using annual data for each company in the selected dataset and tabulate the results of this analysis:

where the regression coefficient δ is the depreciation rate.

The dependent variable D(t) = (DP – AM) denotes annual depreciation (excluding the amortization of acquired intangibles (AM)).

The explanatory variable K(t −1) denotes property, plant, and equipment (net of accumulated depreciation) at the beginning of the year (hence K(t −1) is lagged one-period), and U(t) is the uncertainty (stochastic error) imbued in the statistical relationship (1). The treatment of depreciation in Leopold & Wild (which claimed on the book’s dust cover to have sold over 50,000 copies), 2000, p. 295, is brief and imprecise.

We estimated the annual depreciation rates of several major U.S. retailers using comparable data from 2002 to 2019. This same period applied to each individual retailer controls for similar business conditions. We selected these companies because they are submitted as comparables in many State transfer pricing audits.

The regression algorithm contained an intercept. However, we suppressed the intercept on the table below because in many cases it proved weak or insignificant. The t-statistics are Newey-West estimators that correct for serial correlation among the residuals. See Zeileis (2004).

The top chart includes the Home Depot depreciation rate of δ = 4.21% calculated with data from 2002-2019. The bottom chart shows the unequal durability (useful life, i.e., the implied frequency (or longevity) of the measured depreciable assets (property, plant and equipment (PPENT)), calculated as the reciprocal of our estimated depreciation rates of each company in our dataset.

These results show that the assumption of equal depreciation rates among the comparables and the tested party must be tested instead of being affirmed gratis.

We observe two groups of companies in our sample: one group shows single-digit depreciation rates that range from 4.2% (Home Depot) to 8.9% (Costco).

Another group shows double-digit depreciation rates that range from 10.3% (PriceSmart) to 19.0% (Conn’s).

We are confident suggesting that it’s more reliable to compute operating profit indicators using EBITDA, and not EBIT. However, we can’t draw general conclusions from a small sample. Thus, we must respect the particular facts and circumstances of the transfer pricing audit by testing the depreciation rates of the selected comparables before choosing EBIT as the numerator of the arm’s length profit indicator.

First, we compute a range of comparable profit indicators using EBITDA (operating profits before depreciation and amortization), and not using EBIT.

Second, we apply the most appropriate point (e.g., midpoint) in the range of the comparable profit indicator to the accounts of the tested party, and then subtract a “reasonable allowance” for its depreciation of property, plant & equipment. We call this resulting account EBIT (operating profits after depreciation).

Third, we subtract the amortization of intangibles from EBIT only if it can be shown that the acquired intangibles recorded on the tested party’s balance sheet are “related to the operation of the relevant business activity”.

We suspect that the contribution of acquired intangibles to the business (e.g., retail) operations of the comparables and the tested party is difficult to ascertain with confidence (AM may not be “related to the operation of the relevant business activity” or to the operating assets employed to generate EBITDA).

In sum, we should conduct transfer pricing analysis of operating profits based on EBITDA (≈ OIBDP using Compustat’s mnemonics), not EBIT (≈ OIADP). Using comparable EBITDA (instead of EBIT), we can produce more reliable measures of an arm's length operating profits to benchmark the tested party. See Lakatos & Musgrave (1970), pp. 95-96, 116, 118 (Scientific honesty requires disclosure of the theory, the evidence, and the probability of the theory in light of the evidence).

Notes about units of measure

The annual depreciation of every company is measure in the same flow units of net sales and operating profits [$/T], such as USD per year. The currency symbol [$] represents the units in which stock variables are measured, like the “capital stock” (PPENT) is measured by [T], denoting time.

The coefficient δ measures the proportion of the accounting value of the “capital stock” (property, plant and equipment) that vanishes every year.

We have tax, accounting and engineering treatments of the depreciation rate, and they seldom coincide. 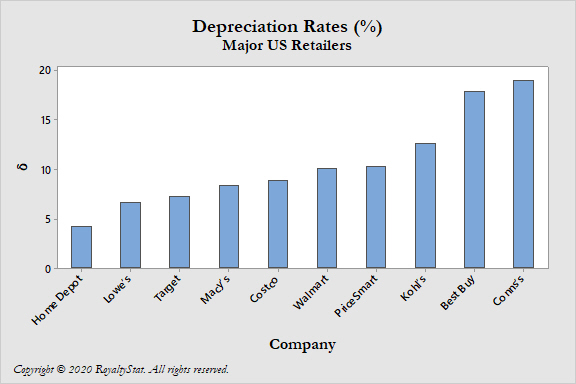 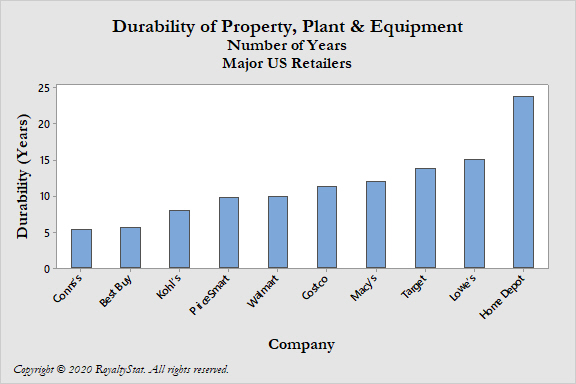