We distinguish between transfer pricing methods based on gross profits and operating profits.

These “traditional” transfer pricing methods based on gross profits are unreliable because of inconsistent allocations of (GAAP or IFRS) “book” accounts between COGS and XSGA schedules. See U.S. Treas. Reg. § 1.482-5(c)(3) (Data and assumptions).

Since the 1994 and 1995 release of the CPM and TNMM, gross profits methods (as a solecism they are called “transactional” methods) are debunked. See OECD 2017 TPG, ¶ 2.68: “In some countries the lack of clarity in the public data with respect to the classification of expenses in the gross or operating profits may make it difficult to evaluate the comparability of gross margins, while the use of net profit indicators may avoid the problem.”

Operating profits methods are the mode

Now, we discuss transfer pricing methods based on operating profits.

In the RoyaltyStat® online (interactive) company financials database, with data sourced from Standard & Poor’s Global (Compustat®), we can add the depreciation of property, plant, and equipment (DP), excluding the amortization of acquired intangibles (AM), to XSGA, and call Total Cost (lato sensu) = (COGS + XSGA + (DP – AM)). We call Total Costs (stricto sensu) = (COGS + XSGA), without the capricious depreciation (DP – AM) allowance.

In practice, transfer pricing analysts estimate the structural equation prescribed by the U.S. regulations and the OECD TPG:

where P(t) denotes operating profits of an individual (comparable) company in fiscal year t = 1 to T, and S(t) denotes net sales (revenue) during the same period.

Other analysts define Total Cost = COGS + XSGA + DP, so our concept of operating profits is different because we exclude AM from total costs. As Mueller (1986, p. 244) has suggested, we exclude acquired intangibles because they represent capitalized monopoly excess profits.

Transfer pricing misguidance sets T = 3 years; however, we are against this ill-fated Meek’s Cutoff and consider it more reliable to use as many years of data as available, i.e., we set T ≥ 3 years.

A major problem estimating the slope coefficient (profit margin) by using equation (1) or worse, using quartiles of the selected comparable profit ratios M(t) = P(t) / S(t), is that this structural equation is misspecified.

We can complete this two-equations system by adding the matching accounting identity:

We substitute (1) into (2) and write the reduced-form equation that is amenable to regression analysis:

We can estimate the slope coefficient of the regression equation (3) using the interactive Scatterplot or Regression function in the RoyaltyStat company financials database. Each online statistical function produces Newey-West corrected standard errors of the regression coefficients. See Zeileis (2004).

From the slope coefficient estimate by using equation (3), we can obtain the profit margin of each selected (comparable) company by indirect least squares (ILS):

which produces a positive profit margin if λ > 1 (i.e., μ > 0 if the profit markup of the selected company is greater than unity).

In either case, we can estimate the regression equation (3) and apply the appropriate profit indicator, either the profit markup or profit margin, and determine a reliable range of operating profit indicators used to benchmark the controlled tested party.

We consider 42 years of data from 1978 to 2019, and obtain these strong regression results:

To stabilize the regression residuals, we take first-differences of equation (3) and obtain a similar profit markup:

In sum, we can obtain more reliable estimates of λ and μ using equations (3) and (4) than using the quartiles of the individual company profit ratios M(t) = P(t) / S(t). For more robust audit defense, we should use this simple regression approach to determine arm’s length profit indicators instead of using quartiles.

Developed to solve parameter estimation in astronomy and physics (Laplace, Legendre, Gauss), regression analysis based on least-squares algorithms is today the work-horse of applied economics. We can access many econometrics textbooks, which have become thick tomes. We prefer those written by Wonnacott, Maddala or Kmenta (increasing order of analytical sophistication). Elementary statistics textbooks (e.g., Hoel) also cover regression analysis (but they don’t appear as perturbed to correct residual errors from the malignant effects of heterogenous variance or serial correlation as those textbooks written by economists).

The reference to Meek’s Cutoff is an homage to Kelly Reinhardt’s film (2010) in which the inept frontier guide Stephen Meek misled a wagon train to ruin in the Oregon desert in 1845. 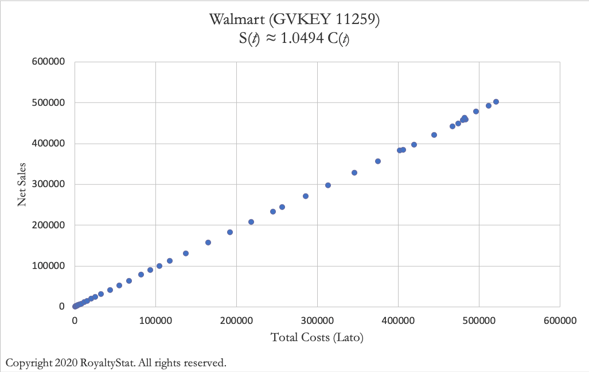