Posted by Harold McClure
Find me on:
LinkedIn

The Organization for Economic Cooperation and Development (OECD) released its Transfer Pricing Guidance on Financial Transactions on February 11, 2020 just before the COVID-19 crisis mushroomed. Some commentators have noted that U.S. affiliates may have to rely on intercompany financing from their foreign parents just as tax authorities and multinationals are reviewing what this new guidance implies in terms of the pricing of intercompany loans.

If the U.S. affiliate incurs intercompany debt from a parent corporation in a high tax jurisdiction such as Germany, disagreement with respect to the arm’s length interest rate could lead to double taxation. This problem dates back over a generation with intercompany financing from U.S. parents to Canadian affiliates.

Justifying this implied credit spread is the more difficult and controversial issue. The GE Capital Canada and Chevron Australia litigations highlighted the controversy with respect to estimating credit ratings. But even if consensus can be reached on the appropriate credit rating for the borrowing affiliate, volatile periods such as the current one as well as other periods of heightened credit spreads highlights the need for reliable and timely market information on corporate bond spreads. Credit ratings are letter grades, which require translating into a numerical credit spread. The fallout from the COVID-19 crisis includes higher credit spreads almost reaching what we witnessed after the collapse of Lehman Brothers in the fall of 2008.

Two continuing litigations between the Canadian Revenue Agency (CRA) and ConocoPhillips involves whether a 0.5 percent intercompany guarantee fee was appropriate. Burlington Resources and Conoco both acquired Canadian oil fields with significant third-party debt with explicit guarantees extended to the lenders by the U.S. parent. Burlington Resources Finance Company’s total borrowing from February 2001 to February 2002 was $3 billion, while Conoco Funding’s total borrowing in October 2001 was $3.5 billion. In a 2019 paper published in the Journal of International Taxation on another Canadian intercompany financing litigation I present the details for both of these issues. A 0.5 percent guarantee fee leads to the all-in cost of borrowing to exceed the interest rate on the corresponding government bond by more than 2 percent for the debt incurred in late 2001. While the CRA appears to be willing to accept an estimated credit rating of BBB, it is asserting that the 0.5 percent guarantee fee is above the arm’s length standard. Credit spreads, however, vary over time and were elevated during this period. The following chart shows the difference between the interest rate on 20-year corporate debt rated BBB and the interest rate on 20-year government bonds over the period from January 1998 to December 2013. 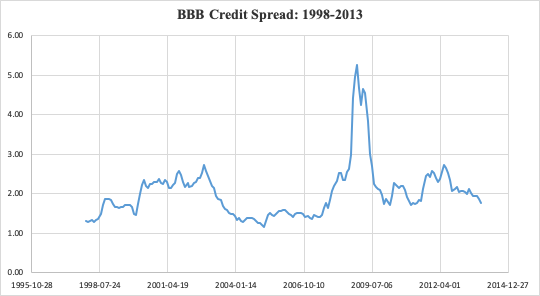 The authors focus on the very high credit spreads during the 2007-2009 credit crisis but their evidence also shows a more modest spike in credit spreads for the 2000 to 2002 period. Our figure notes both the dramatic rise in this credit spread after the bankruptcy of Lehman Brothers as well as the more modest rise in credit spreads for the 2000 to 2002 period. Our second example captures the essence of the battles between the CRA and both Burlington Resources and Conoco Funding by assuming an intercompany loan issued on November 1, 2001 for a 20-year fixed interest rate term. As the first row of the following table notes, the interest rate on 20-year government bonds was 5.39 percent while the interest rate for 20-year corporate debt rated BBB was 7.99 percent. In other words, the credit spread was 2.6 percent.

The second row of this table presents our third example, which is a 20-year fixed interest rate loan issued on behalf of a U.S. affiliate on January 2, 2009. This period was in the aftermath of the collapse of Lehman Brothers. While government bond rates were low, corporate bond rates rose. Any reliance on the section 1.482-2(a) Applicable Federal Rate (AFR) safe haven is misplaced for reasons similar to what I noted in early 2009 in International Tax Review:

Reliance on the applicable federal rate (AFR) safe haven of section 1-482.2 of the Internal Revenue Code is not likely to address the need to comply with both US transfer pricing regulations and the expectation of the foreign tax authority that the interest rate on the intercompany loan be consistent with market interest rates for comparable loans.

The ongoing COVID-19 pandemic has caused significant disruption in economic activity across the globe. Financial markets, in particular, have experienced surges in volatility that had not been seen since the 2007-09 financial crisis … The figure below plots the median value for our measure of credit spreads (the difference between a corporate bond’s yield and a benchmark interest rate on U.S. government securities) at the daily frequency, since the beginning of the year … The figure highlights two important dates. The first one is Feb. 28, when stock markets experienced the largest single week declines since the 2008 financial crisis. While the median spread had been stable at around 100 basis points since the beginning of the year, it started rising around this date, as financial market turmoil became more evident. The second line corresponds to March 23, the day when the Fed announced a series of new measures to support the economy.

Their figures include credit spreads over this period for corporate bonds rated from BBB+ to BB- noting how spreads spiked during March 2020. 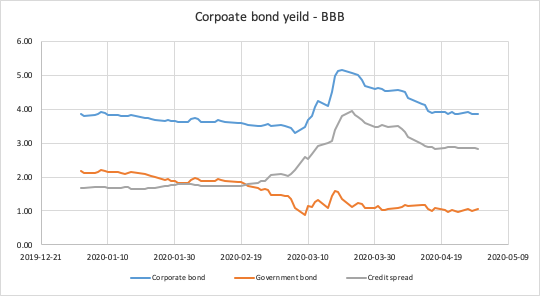 Let’s assume that a German based multinational extended a 20-year fixed interest rate loan of $1 billion intercompany loan to its U.S. affiliate on March 20, 2020 at a fixed interest rate = 5 percent. Could the IRS argue that this 5 percent rate is too high? Could the German tax authorities argue that it is too low? Any reliance on the section 1.482-2(a) Applicable Federal Rate (AFR) safe haven is misplaced for reasons noted above.

For March 2020, the AFR safe haven range was from 1.9 percent to 2.5 percent. While market rates may have been within this safe haven range for the earlier part of 2020, market rates were certainly higher as the COVID-19 crisis impacted credit spreads. Let’s contrast market conditions as of February 20, 2020 versus March 20, 2020. Over this period government bond rates fell from 1.81 percent to 1.35 percent, but credit spreads rose from 1.76 percent to 3.8 percent. As such, the market rate of interest on corporate bonds rated BBB rose from 3.57 percent to 5.15 percent.

Credit spreads depend on the estimated credit rating but also the macroeconomic environment at the time of the intercompany loan. Our illustration of the issues involved assumed that the credit rating for the related party borrower was BBB. During tranquil periods such as the 1990’s or the period from 2003 to 2007, credit spreads for BBB rated corporate debt tended to be near 1.5 percent. The period from 2001 to 2002, however, witnessed a rise in credit spreads which could be likened to a tidal wave. The period surrounding the Great Recession witnessed a spike in credit spreads that could be likened to a tsunami. As this pandemic became more apparent, financial markets witnessed another spike in credit spreads. Whether this will be only a tidal wave or another tsunami is not yet known. Given the heightened regulatory scrutiny with respect to intercompany financing, multinationals with significant intercompany debt should carefully review whether their intercompany loan agreements are arm’s length.

“The Implications of the Credit Crunch for Intercompany Loans”, International Tax Review, February 24, 2009.

“Corporate Bond Spreads and the Pandemic”, On the Economy Blog, April 9, 2020.